In the first spectral epic, Sigourney Weaver and Rick Moranis are both possessed by demonic entities that are destined to find each other and open up the portal for a world-devouring demon.

One is the Gatekeeper.

The other is the KeyMaster.

As a parent, that last role is particularly relevant.

Before my first son’s birth, I distinctly recall my mother waxing lyrical about parenthood and how, until I had dipped my toe into the plunging depths of rearing another life, I could never know true love.

I scoffed at this. I was in my thirties and had experienced the full gamut of emotions. How could I have NOT experienced true love if I was happily married?

Turns out, she was right. And then some.

Prepare yourself for cringeworthy levels of corniness – but your kid holds the key to your heart.

Not only that, but on the same keyring, they have keys to every single emotion you can feel.

You thought you laughed before?

You think you have cried real tears?

You think THAT was anger?

My mum was right. I love my wife and felt that there could be no higher level to the adoration and lengths I would go to for her.

When it comes to my kids though, I’d use her as a spit guard during this Coronavirus epidemic to stop them catching any ills.

The same goes for her. I know that she would easily step on my face to get to my kids in their hour of need – and that is how it should be. Our partnership has been repurposed and is now firmly entrenched in the rapids of parenthood and keeping these little dictators happy.

It isn’t just love that finds new range though.

As mentioned above, every feeling now gets an added depth. Laughter before kids is normally synonymous with friends, alcohol and hazy memories (at least in my case) – but post-parenthood?

Just wait until your child starts to grasp the basics of verbal communication. They become a mini-human version of a sponge, hoovering up every piece of spoken information that their little ears can pick up on. The result?

Twofold really. Firstly, you will attempt to rein in your use of more industrial vernacular. So many times, I’ve shouted out the word “FRIDGE!!!!” in the car as some moron pulls out in front of me from a junction. Cries of “FUDGE,” “MOTHERFLIPPER” and the lesser-spotted “BOUNCYBALLS” have replaced the words I used to use, but which aren’t suited to our current environment. It still leaks out though.

Just try and navigate across a kitchen floor, with hard plastic toys strewn across it, like a mine-riddled sea, and not step on one in just your socks. This results in the previously mentioned safe words being dropped quicker than a Rolf Harris tribute night. You will holler a venom-filled expletive. That will then find a home nestled in your child’s consciousness.

Picture the scene. You have attempted to coerce your child into saying “please” and “thank you” when being given something. You have repeated them to your offspring ad nauseum over days, with only the merest morsel of encouragement from your child.

Yet if you swear just once, they will take it and run with it. Literally. My kid, upon hearing me swear, proceeded to repeat the word “bo$$oc&s” as they tottered in and out of the kitchen, while he played with Thomas and his friends, even in the bath. It took days to erase it and for him to pick up another flavour of the month.

This week it is “cheese on toast.”

The second result of your child becoming a toddling Dictaphone, is how much you will laugh. 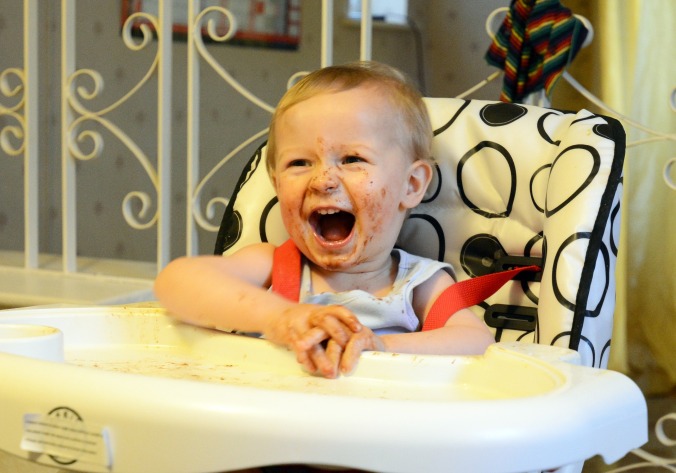 You will bellow, you will laugh yourself silly, until sweat is dripping from you. You will cry with laughter. Two randomly uttered words from your little ‘un can rescue you from the bottomless pit that is a dark mood, and have you spitting out your coffee.

A day spent with my kids has me laughing more than I have done in five years of company spent with any of my friends or family. They have excellent timing, and the delicious randomness they have is to be cherished.

So far, we have covered how children rewrite your ability to love, and how they reprogramme your funny bone.

They are also aware of how to get on your very last nerve, trample on it and p*ss all over it.

Never before have I gone from 0-vein-popping more than I have with my child. Every child is different, but the common strands are that no matter how well they sleep, you will suffer from exhaustion as you spin figurative plates all day. Exhaustion brings with it a lower tolerance to things that would normally hover on the boundaries of your rage radar. Instead of you sighing with a world-weary puff of your cheeks, you instead feel the red mist descend.

Speaking from experience, the angriest I’ve been in the last decade has happened on numerous occasions on a mundane Thursday. You have work the next day, it is midnight and the beautiful combination of you and your partner’s DNA is saw, wide-eyed, watching whatever TV show you put on as you spend yet another wakeful hour trying to lure your kid to sleep.

So, you turn the TV off. Still, nothing.

So, you hold them closer. You know that in their first few months that swaddling helps kids sleep, so you tuck them into your embrace.

They stare and attempt to break out of your grasp like a baby Papillon.

You then combine physical motion with sound, singing at first but then descending into rhythmic shushing in time with your back and forths.

So, you turn the little light you had on – off.

You’re sitting there, rocking your baby, shushing all the while. In the dark. You can’t even see your own hand in front of you.

You certainly can’t see your child’s eyes, but you just know that they are glinting at you with hilarity, edging you further along toward insanity.

Then they carry on their own vocal dedication to white noise, which removes all doubt.

You’ve tried everything. They have been in your arms for an hour. You ache. You’re tired – and you can’t see an end. That whine has a truly terrible talent of being able to strip away all coherent thought and scratch away at your patience, like a hungry rat.

Soon, you’ve shouted at your unaware babe in arms, asking them what else they could possibly want? You’ve fed, watered, changed, sung to them, given them a relaxing swing. Hell, you’ve created a baby nirvana in your arms, and they have chosen to shun it and instead chosen to pursue the way of the sleepless.

They’ve been awake without proper sleep for more than 24 hours, and yet, they have a will that cannot be bent.

So, you ask them what more can you do. Well, the hint of desperation as you raise your voice at them renders it more of a pleading whinny, but underneath is a bubbling rage as you know you are powerless.

You can feel it building as your arms give in to the lactic acid build-up. Your arms tense up and you know you need to vent, to let this accumulation of steam off but you can’t do it in conventional ways as you have the most fragile cargo in your midst.

So, you instead settle for a steroid-fuelled impersonation of Jeremy Paxman, questioning them with teeth bared.

That, of course, means that your child cries. But not the whine of the sleep-shunners. No, this is the real thing, and it unlocks yet another emotional door – this time it is guilt.

You can’t believe you’ve behaved like it and your words have made the thing you love most, upset. You hug them tightly, shower them with kisses and apologise profusely.

They, meanwhile, settle back down for another episode of “How far can I push my parents toward madness without going into foster care.”

The truly wondrous thing, is that all of these emotions and the full range contained therein, can often be inflicted upon you within the space of an afternoon or evening.

So, you thought you were fatigued through a lack of sleep? Because that magical five hours of sleep you used to get has been cut in half for the last eighteen months?

No. Your body can adapt to that, and so can you. Your short-term memory will crumble like a cheap pie, but you can soldier on.

Having the full gamut of the emotional spectrum unleashed upon your consciousness though? That will push the finest of minds into survival mode.

Your child inherits a valuable set of keys early in their life – and from what my mum has told me – this particular set of keys are never lost.

Are they the Keymaster?

You bet your bottom they are.

Happy Birthday to the man who inspired me to try and dye my hair red, but instead ending up with pink - We love you @freddieljungberg !
Recommended football books have just given my book the thumbs up, here’s the tweet - https://twitter.com/myfootballbooks/status/1382737421457100800?s=21
In the concrete jungle. #graffiti
Parenting done right, twice. The youngest, resplendent in 🔴&⚪️ #NewGooner #hedidnthaveachoice #Arsenal
Job done as Dad. #WelcometoTheGoonerFamily #NewGooner #ProudDad
Vape tricks? You ain’t got nothing on my vape ‘seahorse.’ It’s like one of those magic eye pics - you have to keep looking. #Vaping
Loading Comments...
Comment
×
<span>%d</span> bloggers like this: