Thirty years ago to this very day, Pan Am Flight 103 erupted in mid-air over Lockerbie, Scotland. Detonated by 450g of plastic explosives, the aircraft and its contents were scattered across a radius of hundreds of miles.

All I remember was the few miles that covered my tiny, yet comforting hometown.

I was five years old on that horrific night. A five year old’s recollections are fleeting, like a stop-gap animation of a hummingbirds wings. You get the gist of what’s going on, but there are obvious holes in the story. Some things shine brighter than others and resonate with a darkness that renders you unable to consign them to the back of the dusty cupboard in your head.

Thirty years ago, I was eating bangers and mash. Such is the tight-knit community in Lockerbie back then, everyone knew that this night was Bottle Night at the bingo. It meant mums could let their hair down a bit as alcohol as well as money were being awarded as prizes for a full house or even a line.

Then, there was a loud noise. I didn’t have many instances for comparison at this tender age, so my first thought was fireworks, but my mother and sister huddled at the window – and the awful colour of the sky – meant that this was far from an homage to Guy Fawkes and his nefarious ways.

From here, my mind goes blank. I try and cast my minds eye back and I cannot fathom how my mother came to the decision to drag her children out while a gate to Hell had opened. Is curiosity that powerful that it can override any baser notions – such as the safety of you and your family?

Regardless, I do remember the reasoning behind why we were out traipsing the war torn streets, and it is kind of what makes Lockerbie so special. Our family all lived in the town at the time, and we were going out to check on their wellbeing. As we walked, mouth agog at the scenes that enveloped us, we stopped frequently as we invariably bumped into someone we knew well. It was both a gift and a curse of the small town ways.

One of the main thoroughfares in Lockerbie is Sydney Place. Everyone knew it well. It was where my best friend at the time lived, where I used to go and enjoy halcyon, carefree days playing Nintendo. As we approached the street, which is opposite the historical beginnings of Lockerbie, the cattle market, an image was burned upon my retina that, even now, I can’t forget. 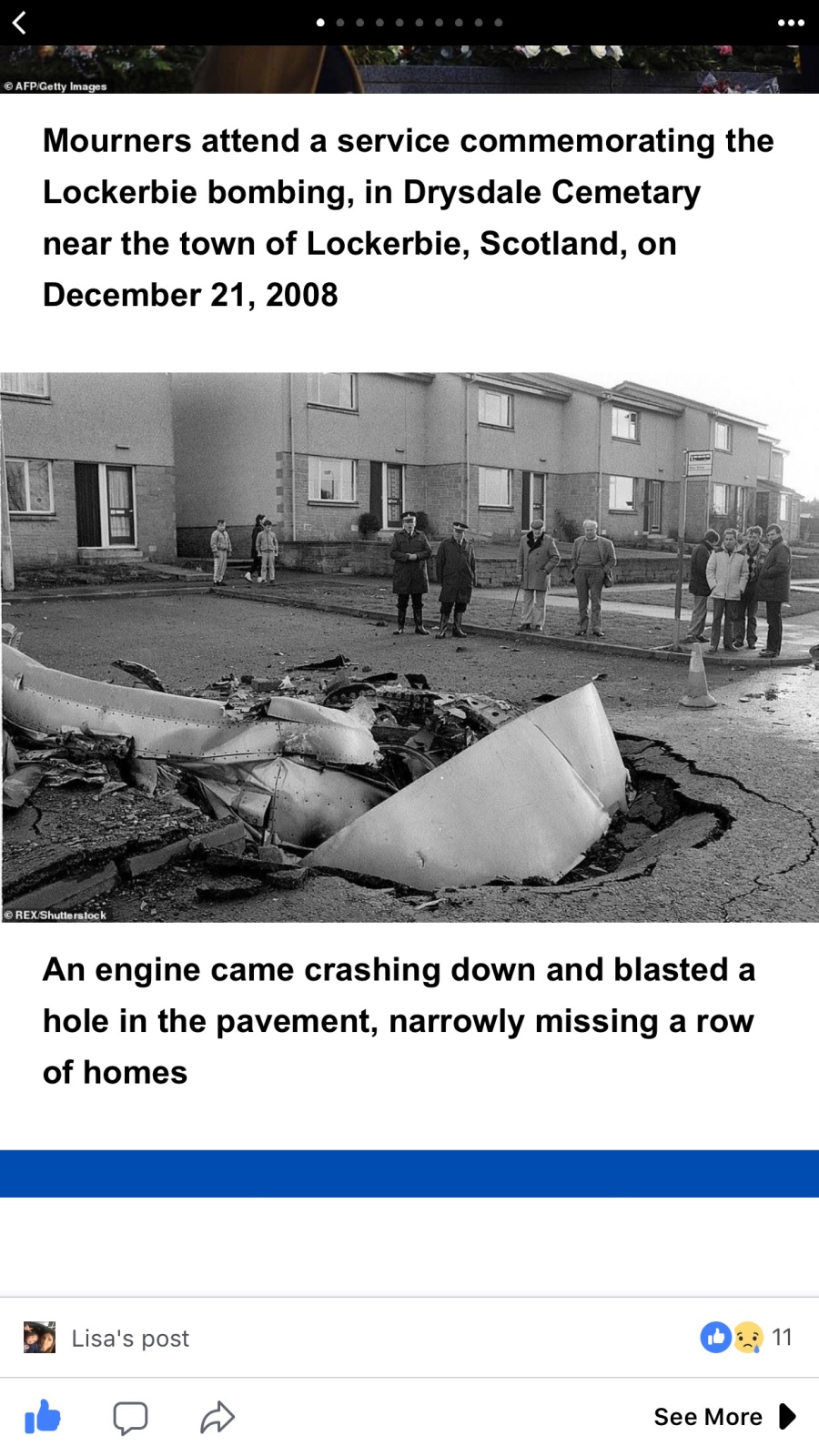 It was a large hole, or a gaping maw if you prefer, which spewed forth wreckage of some sort. This flash has been seared into my consciousness all this time, but with the disaster gaining more than a little media attention and no sign of this harrowing slide of time on TV or newspaper, I figured that what I saw in my head was the tweakings of an overactive child’s imagination.

A couple of years after the disaster, I was ushered to a child psychiatrist, apparently traumatised by the events. They asked me to draw pictures of what I saw, and the only image I recall scrawling is one of the tail end of a plane sticking out of a hole.

I saw validation of this image for the first time only two weeks ago. It was part of a BBC article and it carried the photo of the hole near Sydney Place. The effect was dizzying and quite sobering – and brought a fair amount of emotion forward, emotion which had been stuffed into the same chest that had been unceremoniously shoved into the dark corner of my mind that carried the Sydney Place image.

From this moment on, my memory becomes a montage, little snippets, incomplete puzzle pieces, jumbled together chronologically but not the complete story. A suitcase here, flames there, screams and sobs.

We eventually found my Aunties, Uncles and cousins safe and well – we were the lucky ones. Some had their loved ones taken away and were never the same. Some saw too much and their mind didn’t have a little cellar to drop the terrible things in – and so were changed forever.

I left Lockerbie for London in 1998, my formative years all spent in this idyllic town, but this was a façade. The shadow from events thirty years ago always cast darkly, and no amount of smalltown cheer can ever change it, much like you can’t change how something so massive impacts you. I was lucky enough to have the protective layer of youth around me and my memory.

Others weren’t so fortunate.

Some things are just there. You may keep them out of sight and to a degree, out of mind, but every now and then the wind will blow a certain way, lifting the shroud you placed over these dusty yet terrifying objects.

Thirty years ago today, I first discovered that I could hide certain things from my memory, but I couldn’t forget.

I don’t want to forget either. How could I, when justice still hasn’t been doled out?

Author, copywriter and blogger. View all posts by @JokmanAFC