I’ve been told time and time again that as a parent, it’s important to unwind, unclench and de-stress.

That doesn’t mean enjoying the sanctuary that a locked bathroom door provides (the five minutes you’re occasionally granted for your more natural movements seems like a 2-day spa break), but actually finding an allotted time to shed the stresses and strains that a child heaps on you.

Easier said than done however.

Some things seem like daydreams, pie in the sky schemes that will never come to fruition. The crushing wheel of reality grinds the life out of any notions you may have of respite. How could you escape the monotonous but necessary routine you have? Your kids need the framework that the routine provides, and it may be boring but you somehow cling to the routine like a baby monkey clings to its mother. You kind of need the routine too.

Without it, then chaos ensues. Just yesterday my wife and I had to buck our trend when we ran out of a few things – spillages of all means were catered for that day, which meant our and your favourite weapon of choice, the wet wipe, had been used up – so my wife travelled to the supermarket to stock up on the necessaries.

She was gone for an hour but the time she went was around our oldest’s bed time. The problem was, we needed those wipes, nappies and butt cream. Without them, the kids couldn’t go to bed and my wife and I would silently rock in the corner as the house gets pulverised by a rampaging toddler and the never-ending sound waves caused by a 3 month old who wants everything NOW.

So, in the hour and a bit she was gone, our eldest, no friend of slumber at the best of times, saw an opportunity, and ran with it – literally. Every toy was tossed to all corners of the bottom floor of the house, every piece of clothing that was residing in the washing machine awaiting its trip to the tumble dryer was unceremoniously taken out and used as an accessory to our boy’s fervent combo of laughing, screaming and running.

In the midst of this mess-tornado, I sit with my youngest, feeding him. Which renders me incapacitated as the oldest rearranges the entire room to his whim.

My wife comes back and queries what the hell happened since she was gone? (and rightfully so) but I had no answer, just a resigned shrug, which was enough. Or at least it wasn’t until our eldest ran back into the room holding a bra, a teatowel and a Toot-Toot Driver Fire Engine, gibbering his nonsense language all the while. Then the penny dropped that our boy was in the mood for mischief and didn’t really fancy going to bed.

So, you see? Ware the breaks from routine.

That does kind of limit your possibilities. If you never break the cycle then you and your kids will never do or see anything, which is vital to their growth.

With that in mind, my wife organised a weeks break to the Isle of Wight.

We hadn’t been away for a good many years, so this seemed quite exotic in comparison.

The week before we left, my wife started packing for us all. 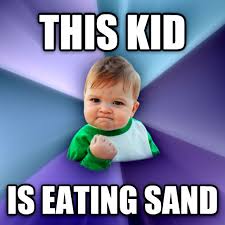 My word, it was beyond staggering.

While I had packed a change of clothes every day and a few contingency plans (random milk, saliva, chocolate, condiment and questionable stains crop up on the regular, so always be prepared), my wife took care of ensuring our kids were ready for a week away.

Well, it wasn’t really away from the house – as we had packed every single thing that was in our house. Only the location would be different.

Bottles, formula, steriliser, bottle heater – that’s just for the baby’s milk! The kids had about three to four changes of clothes for every day and while their clothes may be smaller and easier to pack, when you multiply them by 228, it still takes up a ridiculous amount of space.

So much so, that we took two cars.

The suspension creaked as we loaded our three huge cases and countless holdalls into the vehicles, but we got to the ferry safe and sound, with both kids enjoying the car ride and having a doze – lucky little buggers.

When we stopped and waited to pile onto the ferry, we then had to locate the changing bag, drag the slumbering child to the changing facilities (waking a sleeping child is tantamount to three years in a Malaysian prison cell with forty other inmates. Just DON’T DO IT!!!) and then change them. Then bring them back to the car and find the snacks and keep them happy while we STILL WAIT FOR THE F%£$%$NG FERRY.

Apparently, they had overbooked, so we had to wait until the next one.

It’s at times like these that your barriers of resistance break down.

Normally, when your kid is whining for a seventh juice in the space of two hours, you stand your ground, as it’s for their own good.

When you’re left without a plan though, you do all you can just to keep your little ones happy. The youngest isn’t much bother, just make sure he’s fed and give him cuddles, but that manifests another problem. With one parent giving cuddles, that puts them out of action in handling the eldest, who is intent on stretching his legs surrounded by many cars. So you give them chocolate, crisps, whatever keeps them captivated and with you.

You could do it without these bribes, but no one likes seeing a toddler thrashing around in your arms like he’s at a rodeo.

We eventually get on the ferry and to our accommodation, which was great – and had a hot tub! Would we get the chance to use it though?

Yep, at 1am when the kids were guaranteed to be asleep.

The holiday was actually great fun, the boys seemed to enjoy the many activities we lined up for them, and to see the eldest running amok and shrieking with delight on the golden beaches was really uplifting.

Of course, interspersed with those moments of joy, I was chasing after him as he approached every person on the beach (especially the near naked OAP’s) and seemed determined to swim out to sea.

We bought reins, such was his effervescent attempts to wrench himself free from our grasp (why do kids seem hellbent on eating their own bodyweight in sand? They don’t like it when it’s in their mouth, but just watch them do it again seconds later!!!!).

The holiday was a success, but even then, we installed a routine to help us cope with getting them out on time so we wouldn’t be spending half our time indoors. The kids loved the sea air (and we loved the effect it had on them) and we’ll be booking for somewhere next year.

We might rent a bigger car though, I’m sure we’ll have plenty to pack…

Author, copywriter and blogger. View all posts by @JokmanAFC