Language in major cities is a patchwork quilt of sorts.

Mishmashed together swatches of differing languages, held together with body language that needs no words. Dialects and lexicons buddied together to form unique patterns, it is sometimes fascinating to see it all in action.

Thanks to a change in career, I now have to commute via public transport, and it has been a door which held behind it a world of communication I never knew existed. 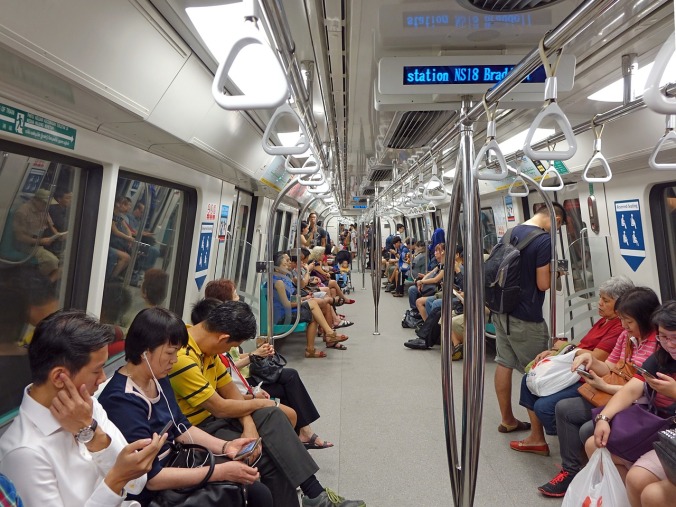 Train travel in London I can only surmise is very similar to other hubs of business such as New York, Tokyo, Paris and Berlin. The metal capsules you squeeze into are a social network of sorts, they make you share – even if you really don’t want to.

There is a code of conduct that is unspoken that all must follow. It is not something that is handed to you in a handy pamphlet as you embark on your first journey. It is just something that most people inherently pick up on.

Avoid touching unless it is impossible to do so.

Sound is the enemy.

These three rules are the tenets on which all behaviour and interaction sit upon. As the train stops at each station and fills up fit to burst, you become closer and closer to people who are in the same awkward mindset as you. You suddenly become ensconced in your phone screen, not willing to look up unless it is to scold someone with stern eye contact for making a noise like a sneeze.

From an outside view, it is quite ridiculous. We are all travelling in the same direction, we all just want to reach the destination and get off. Yet each minute is jarring and a personal nightmare that can only end when the doors open.

It is the minor interactions, the tiny bridges between people though, that really provide an insight into this mysterious behaviour.  These motes of minutiae are not contained on a Rosetta Stone, dug up by an earnest archaeologist intent on adding his name to history. No, deciphering this language is inherent in every one of us.

The eye contact to thank someone for moving slightly to make an extra inch of room. How can eyes change so much to portray a thought or words? They do though, and no words are exchanged. You see the eyes, you read them and you instantly know. Even if you’re a novice to this language – there are no night classes – you already have the knowledge to do the same thing to someone else.

It is also wonderful to witness from the outside too. As you look outside the window rather than look dead ahead at a stranger’s neck which is about a millimetre away from your eyes, you happen to see this exchange taking place. It highlights what amazing creatures we really are.

Words are an unwanted guest on the train. You only need to see what happens when someone decides to talk on the phone or sit and chat with a friend. If the decibel level rises, those very eyes that are capable of such beautiful nuances suddenly change and are mercilessly flinging flame-tipped evil at someone they do not know.

The rules on a train are far removed from anywhere else. Your daily journey sits well outside normal convention, but it happens to millions. The language used by all is universal when crammed into a train carriage, but contains no words.

In my first week as a trainee (get it? TRAIN-ee?) I stood close to the doors. This is a position of responsibility, and one that everyone expects you to commit to. You are the button pusher, all hail the button pusher. You are the gatekeeper that can shave milliseconds from a journey with your lightning quick reactions.

Or you can do what I did.

I had no idea the pace with which you are required to open the doors of freedom. So, as our train pulled up and ground to a halt, as my fingers slipped from the button, people lurched forward.

‘Why is this imbecile holding us all to ransom? Why, oh why button pusher,must you delay us so?’

Panic wrapped its cold grip around my spine and my brain responded in kind. I started to laugh.

‘No, button pusher. No, their eyes exclaimed as I wheeled my head around to offer them my apologies through the art of comedy.

A man reached across and pushed the button for me and the stampede enveloped my prone frame. It was subliminal, but it was a message that this was unacceptable. You must push the button and open the doors, this is your job.

The laugh tipped the herd over the edge and as they bustled me out, it was another example of the language that needs no words.

Laughing? That constitutes sound. We cannot abide this.

The button pusher NOT pushing the button? We cannot tolerate this.

You must keep your finger on the button and press it vigorously and repeatedly as soon as you are stationary. This sends a message to the rest of the pack that you will have those doors open as soon as the doors allow. You are on top of things. You are the button pusher.

Since that moment, I have stepped up to take this grandiose position again, and that door button knew that I could take the pressure. I didn’t let anyone down, I served my squad well.

If you ever need to take the train, heed the rules well and don’t take the door button role lightly.

This language may not be official, but it has millions of speakers across the world. We are all bilingual essentially.