It’s been a hell of a rollercoaster.

It may be a tired adage, but since becoming a father, my life has had more ups and downs than my child’s trousers after repeated changings.

So the rollercoaster thing is pretty accurate.

There’s been a plethora of changes, most of which have been pored over in the previous chapters of this blog.

One of the more difficult adaptations since fatherhood mercilessly announced itself is the theft of your privacy.

With your child, you must be prepared to give yourself wholly. There are no half measures, your kid doesn’t allow it and smashes down all barriers that you may have subconsciously put in place. You will drop everything to pick up the red plastic phone that he/she is handing you – and you’ll answer it with sincerity.

You’re on the edge of your seat as the boxset you’ve consumed nears a dramatic climax. What will happen next? You’ll have to wait for a couple of hours while you go elbow-deep in faecal matter, followed by you crafting a midnight snack of the finest bottled milk for your offspring. Then you’ll ensure they slip off to the land of dreams peacefully. Then you’ll go back to the couch, eager to pick up where you left off – and then you’ll fall asleep too.

But it’s the lack of privacy that takes a while to adjust. The other changes are unceremoniously thrust upon you, so you have no choice. The reduction of your own time though, you notice in increments, and in the end, you’ll realise that pretty much throughout the day, you’ll be at the mercy of those cute, tiny, but cunning little hands.

They soon figure out how to open doors and cupboards. That means you must have activated your super vision that morning, otherwise they’ll soon be attempting to either climb into the toilet or consuming anything those hands get their hands on. That also means that your guard must be up. 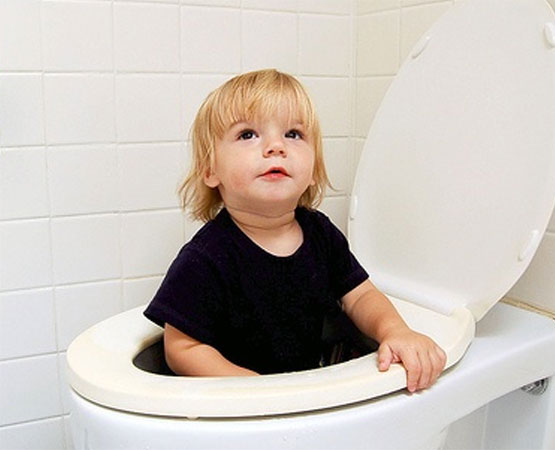 On more than a few occasions, I’ve had a moment when the toilet door has opened and I’ve had guests. The door creaks open and there stands my son with the cheekiest grin – it’s like he knows what he’s doing and thinks he’s hilarious.

The guests thought so too.

Then there are moments when you’ll be on your own with them. You’ll have played, fed and laughed all day, but you still have to perform the basics. That’s right, nature calls.

Seeing as there is no one to watch them, you either put them in a playpen/cot, or you bring them in with you.

That means that you’ll have a visitor whilst on the porcelain throne. It doesn’t end there though, you’ll still be off and on that toilet seat more often than a politician changes his manifesto promises.

They’ll pick up the shampoo bottle, the toilet tissue, turn the taps on (or at least try and thus that means an increased risk of them clouting their head), walk into the shower. So many things you must stymie, all while attempting to “lay a cable.”

You’re on duty, so all other things must fall by the wayside. You can try and cram everything in while they nap, but you can’t rely on nap time. Sometimes it’s two hours, and you can load and unload the dishwasher, dry the clothes, fold the washing, iron and you may even have time to eat something other than your kid’s leftover spaghetti hoops.

Sometimes it’s twenty minutes, and you hear their cries as you clamber out of the shower. You rush upstairs sodding wet, and put on underwear as you climb the stairs.

Your time isn’t your own, so get used to it.

It does make those special moments even more special though. When your partner or parents take your pride and joy out for the day, or even just to the supermarket. You take the most ordinary things for granted, and it is only when they are taken from you that you realise how good they are. An uninterrupted shower? Bliss. How about an hours nap in the afternoon? Just what the doctor (Psychiatrist) ordered.

You see, you don’t actually mind that your time isn’t your own anymore. You’ll rush home after work just to see their face, and you’ll be on the floor in your shirt and trousers, playing with the wooden blocks and giving funny voices to the stuffed toys. Anything to hear that cute giggle. Sometimes you’ll get the laugh, sometimes they’ll walk away like you’re not even there, not recognise your time is precious, and instead choose to watch the washing machine – that is after all, far more entertaining than you of course.

Sometimes they’ll even bawl their eyes out because you grabbed the wrong toy. They keep you guessing constantly, and you’ll keep on coming back for more.

As they grow in front of you, you don’t mind that they take over your bath, they want to watch videos in your lap – and nowhere else – while you attempt to eat your lasagne. You see them pick up things that YOU have taught them, and that place in your chest that swells everytime you see them? It just grows bigger.

They fill you up, and even though you’re tired, you’re so, SO tired – you know you wouldn’t have it any other way.

Well, maybe going to the toilet in peace and being able to read my Twitter feed would be nice, but all the rest is just life-changing.

In the concrete jungle. #graffiti
Parenting done right, twice. The youngest, resplendent in 🔴&⚪️ #NewGooner #hedidnthaveachoice #Arsenal
Job done as Dad. #WelcometoTheGoonerFamily #NewGooner #ProudDad
Vape tricks? You ain’t got nothing on my vape ‘seahorse.’ It’s like one of those magic eye pics - you have to keep looking. #Vaping
Good thing I used ‘Sex Panther’ by Odeon this morning... #Musk
Thank you @thingamajik for making this #FF7 fanboy very happy.
Loading Comments...
Comment
×
%d bloggers like this: